ITALFIL S.p.A. has always had in its DNA, the need for continuous research and development of its infrastructure and company plant, with investments aimed to increase more and more, as far as possible, the already excellent quality of its products by developing, in the meantime other new products to include in the world market and thus succeeding to meet the demands and needs of a number of customers, which are in continues grow.
The investments, over the years, have involved the company in a transversal manner.
However, the fundamental technological innovations of the these last few years concerns the chemical pickling system of the wire rod, the annealing heat treatment furnaces, and the plant for galvanic copper plating.
Specifically, the chemical pickling is a treatment aimed at cleaning the wire rod superficially, by removing the surface scales. ITALFIL S.p.A., carries out this specific treatment on all the different types of wire produced.

Compared to the traditional mechanical pickling, carried out with brushes or other abrasive devices, this chemical pickling allows to have a more accurate and homogeneous cleaning, with considerable advantages, which positively affect both the material processing, the final appearance of the wire and, last but not least, its weldability. 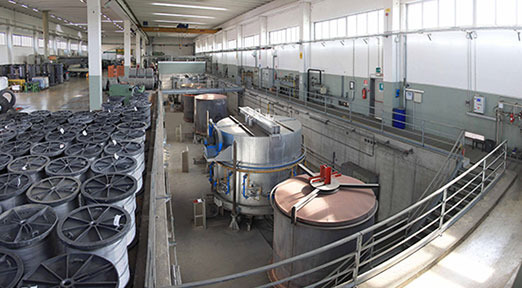 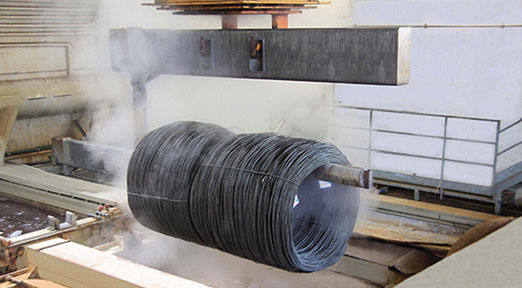 The annealing furnaces, instead, allows you to perform thermal treatment on the wire rod and semi-finished products, necessary to relax the internal stress of the steel and thus facilitating the drawing.
ITALFIL S.p.A has important bell annealing furnaces, that consist of a double-shell between which combustion occurs and the heat is then radiated to the inside of the inter bell which contains the wire to be treated. The atmosphere in this inner bell, which is absent of oxygen and rich in nitrogen, does not allow for surface decarburization of the steel.

Finally, the galvanic copper plating plant, conceptually unique in its kind, , allows to copper plate low alloy and high alloy steel wires which, for their chemical composition, may not be suitable to receive a copper plating of a chemical nature.
In this case the copper is then deposited onto the wire surface by means of an electrolytic process.